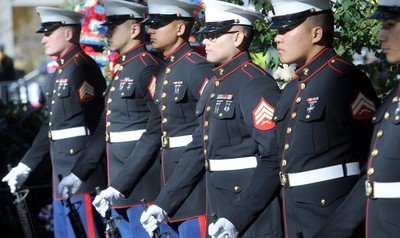 Even the most optimistic interpretation of this week’s government shutdown quickly slides into the abyss of the bottomless distrust between Republicans and Democrats in the House.

The brief standoff over immigration and funding the government mostly dramatized Washington’s dysfunction. But it offered one glimmer of the hope when about two dozen senators from both parties coalesced to urge a quick resolution that reopened the government.

That loose alliance is now expressing optimism it can reach agreements on other thorny issues, starting with the long-term fate of the roughly 800,000 “dreamers” brought to the U.S. illegally as children by their parents. President Trump in September ended an Obama-era program that shielded them from deportation, though a federal District Court has temporarily blocked his decision.

Yet even if the Senate can come together on the “dreamers” or other issues, any such cooperation would confront the chasm between the parties in the House. GOP leaders there have already indicated they don’t feel bound to even consider the legislation if the Senate approves a deal.  Enter a new organization called With Honor.

The group, which is announcing its first campaign endorsements Thursday, has launched a major effort to elect to the House more recent military veterans who commit to working across party lines. The aim is to create a bipartisan core of House Members who are inclined to seek common ground, whatever their personal views. “The goal is to get enough of a critical mass that can function as a cross-partisan coalition and is able to get things done,” says Rye Barcott, the With Honor co-founder and CEO.

The key insight, he believes, is that veterans, with their experience working in diverse teams that pursue common goals under great stress, are uniquely situated to temper the partisan hostilities in Washington. “There is some generational mindset in [that] a lot of these individuals are coming at this from not a particularly partisan place,” he says.

Barcott himself served with the Marine Corps in Africa, Bosnia and Iraq—including a deployment to Fallujah-from 2001 to 2006. After completing his service and obtaining two graduate degrees, he spent several years working with Duke Energy in North Carolina before starting a business with another marine that invests in U.S.-based solar energy companies.

About a year ago, Barcott says, he noticed that an unusually large number of veterans were announcing campaigns for Congress—particularly those who served after the September 11, 2001 terrorist attacks—about one hundred, by the group’s calculations. He consulted with two post-9/11 veterans already in Congress (Republican Mike Gallagher and Democrat Seth Moulton), recruited an impressive board of advisers and set a highly ambitious goal: to raise $30-35 million to elect more post-9/11 veterans from both parties to the House. From that war chest, he wants to support about 25-35 candidates with the political equivalent of shock and awe: independent expenditure campaigns that will average about $1 million each.

Barcott says it will endorse from among those who pass a character screen and sign the group’s pledge, which commits them to serve with “integrity,” “civility” and “courage.” The pledge defines courage as agreeing to regularly meet with and co-sponsor legislation with representatives from the other party. Although about two-thirds of the post 9/11 vets seeking office this year are running as Democrats, Barcott says the group will work to maintain its bipartisan balance by dividing its contributions about evenly between Democrats and Republicans.

That approach is evident in the first two endorsements With Honor is announcing Thursday, both in Texas Congressional primaries. The group is backing Kenneth Sheets, a Marine veteran and self-described “limited government conservative” running for GOP nomination to the Dallas-area seat that retiring Republican Representative Jeb Hensarling is vacating. It is also endorsing Gina Ortiz Jones, an openly gay former Air Force intelligence officer, seeking the Democratic nomination to oppose Republican Congressman Will Hurd in San Antonio, one of the Democrats’ top 2018 targets.

The two are far apart on most issues. Sheets’ website touts his support for border security,  gun owners, and his determination to cut taxes and roll back “burdensome and unnecessary” regulations. Ortiz Jones, in an interview, stressed her support for the Affordable Care Act and ensuring legal status for the “dreamers.”

Yet both second Barcott’s central insight: that veterans will be more inclined to surmount their differences to reach reasonable compromises. “The ‘With Honor’ stamp is something I look forward to being able to highlight, which is that even in this political environment, there is a group of folks who want to put their country over their party,” Ortiz Jones told me.

Likewise, Sheets, a former Texas state representative, told me that in the military, “we have to conduct our missions with the utmost professionalism or people die. That level of danger will … instill a willingness to work together. People who put themselves at risk for our country better understand the principle of united we stand or divided we fall.”

With Honor is swimming against the current that is transforming House elections into parliamentary contests less about individuals that about which party voters want to control the majority. Recognizing that many activists from one party will be reluctant to support candidates, however personally exemplary, from the other, the group is allowing donors to direct their contributions only toward veterans from their own side.

But Barcott is also arguing to potential donors that both parties, and the country overall, will benefit from electing more problem-solvers on each side. He’s about to discover whether enough donors—and voters—will accept the argument that candidates who have faced real combat are best positioned to lead Washington away from its partisan trench warfare. “We are,” Barcott acknowledges, “essentially an experiment in this.”

This Atlantic article was written by Ronald Brownstein and is available here.