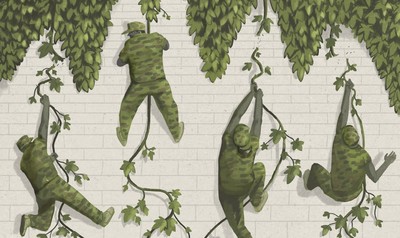 I remember exactly where I was when I learned I’d be able to join the Marine Corps. It was a little after 7 a.m. on a Saturday in the winter of 2007. I was 17 years old, picking cabbage at one of the many seasonal Southern California farm jobs I used to work in order to help my family pay the bills. When my phone rang, I picked it up and put down the knife I was carrying.

“Wow, that’s great,” I said, and sensed she had more to say, some details to nail down.It was my recruiter. “Great news,” I remember her saying. “We secured you a spot in training…” She trailed off.

She asked if I’d passed my GED or had completed the requisite community-college classes, and I told her I’d done the latter, but didn’t know results of the former. I asked how long I had to decide if I’d accept, and she told me an hour. She added, “I need you to realize the opportunity you’re being presented here. We’ve never taken this many kids without a diploma.”

An hour was a very short time to be deciding not to spend my 18th birthday (or any other days in the near future) with my friends or family. But it wasn’t lost on me that the Marine Corps—which, like the military as a whole, represented for many poorer kids like me a path out of a town with few well-paying jobs—wasn’t admitting many people without high-school degrees. So, after that phone call, the idea of enlisting, once an abstract idea, had transformed into a reality I could imagine clearly. My chest felt tight and I knew things were never going to be the same again.

Indeed, they aren’t. Ten years later, I’m in northern Manhattan, in my second and final year of graduate school at Columbia University. As a middle-school dropout who picked cabbages and swung a hammer for most of my formative years, the fact that I’m now attending one of the most prestigious universities in the country is something I still have trouble believing.

My hometown of Tehachapi, California, population 12,500, is a poor place. More than a fifth of its residents are under the poverty line, and 40 percent of students (including me, once upon a time) qualify for free or reduced-price school lunches. Tehachapi has a median household income of $41,700, which puts it in the second-lowest income quintile for neighborhoods across the country, an overrepresented set in the military. I was a lot less educated, and a little poorer, but otherwise typical of the average enlisted American: Two-thirds of the 159,000 enlistees in 2007, when I enlisted, were white men, mainly young people from small towns and rural areas.

I left Tehachapi with a sense of self-confidence that only a teenager can conjure. In doing so, I followed a time-honored tradition of using the military as a springboard to overcome a relatively poor upbringing. In that process, I’ve found that the relationship between poverty and patriotism is a tricky one; many in poverty are proud of their country not because they have attained true freedom, prosperity, and happiness, but because they dream of doing so someday. Even without really knowing freedom, I was convinced it was worth defending.

By the time I’d enrolled at Columbia—before that, and after the Marine Corps, I’d worked at the financial consulting firm PricewaterhouseCoopers—I’d attained a measure of that freedom. But being on an elite campus after living the life I’ve lived is often jarring.

I remember how it felt when, earlier this year, in a class on development economics, a slide came up that read, “Education investment by the poor—why don’t they go to school?” My classmates proceeded to discuss this “they” and their motivations. It was surreal to have my own experience encapsulated in a PowerPoint slide, and I realized just how little of a grasp some of my peers had on the lives of people much poorer than them. How can poverty be solved when the future policy makers and development economists of the world have little to no personal experience with the problems they aim to address?

Veterans who came from poverty have a lot to contribute to college campuses. They are some of the smartest, most driven people I’ve ever met. The traits instilled in me from the military—decisive leadership, diligence, and calmness under pressure—are the very same that have made me a successful management consultant and graduate student.

It wasn’t until recently that I realized how unusual my Ivy League story was. Last year, there was only one veteran attending Princeton as an undergrad, and just three at Harvard. In fact, in 2016, out of the 160,000 people enrolled in a group of 36 top-flight undergraduate programs, just 645—or about 0.4 percent—of them were veterans. There are estimated to be 22 million veterans in the U.S., which works out to about 8 or 9 percent of American adults—meaning veterans are grossly underrepresented at these 36 schools. It’s not that veterans aren’t going to school—they are. Research by the Student Veterans of America, a nonprofit, on the educational outcomes of 800,000 veterans between 2001 and 2010 indicates that 52 percent completed postsecondary education, and many went on to earn multiple degrees. And yet so few of them ended up at top schools.

Top-tier graduate programs appear to do a better job attracting veterans. The Wharton School’s class of 2018 has 34 veterans, 7 percent of the class of 2019 at NYU’s Stern School of Business are veterans or active-duty, and as of last school year, Stanford’s graduate programs had 119 students who were veterans or active-duty. But many of these students were financially better-off to begin with. Out of those 34 Wharton veterans, 21 earned their undergraduate degrees in the Ivy League or at Annapolis or West Point, two top military colleges. Research from the Heritage Foundation, a right-leaning think tank, indicates that West Point in particular tends to draw disproportionately from students who grew up in the highest-earning households. So, there are many veteran grad-school enrollees who likely would have ended up in a financially secure place even if they hadn't joined the military.

Why aren’t more veterans who weren’t born to well-off families making it to more competitive schools? I’ve found that the problem isn’t a matter of ability, drive, or motivation. Instead, I think it has to do with the sustained academic practice they miss out on as a result of their upbringing.

I remember that Duke University, my top choice for undergrad when I left the military in 2011, told me that it usually only accepted about 5 transfer students per year. They made it clear in their communication with me that without transferring from a “rigorous institution” and having an exceptional SAT score that it was unlikely that I would be a competitive candidate.

Both of those conditions were simply an impossibility for me, as well as many of the friends I served with who had gone to underperforming schools growing up. While my fellow transfer applicants were in selective high schools, attending SAT prep classes, and taking Advanced Placement tests, I was hanging drywall at a construction site—not an experience that an admissions committee was going to value. Beyond that, growing up in poverty instilled in me tremendous self-doubt. I used to think, “People like me just don’t go to schools like that.” This is a mindset that I’ve recognized in many who grow up in small towns or are otherwise disadvantaged.

It’s true that the military can play a significant role in improving the socioeconomic mobility of America’s poorest—indeed, it did for me—but there are so few veterans (let alone veterans who grew up in poverty) at the most prestigious universities that there must be more than a few broken rungs on America’s economic ladder. This is reflective of a larger, society-wide trend not confined to veterans, in which the household income of one’s parents is highly predictive of one’s future earnings. But it particularly matters in the context of Americans who have served, who may get symbolic support from the public but find themselves locked out from the highest-level conversations that can shape the lives of them and future enlistees.

This article was published in The Atlantic on November 12, 2017