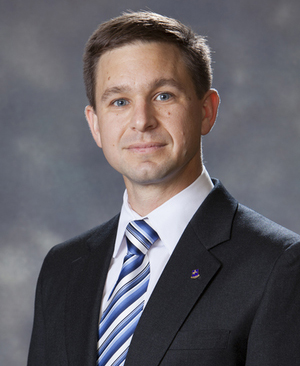 That’s how long it took Army Maj. Carl Wojtaszek to complete his Ph.D. in Notre Dame’s Department of Economics—a little more than half the typical time.

An assistant professor at the U.S. Military Academy at West Point since 2008, Wojtaszek received a prestigious, yet finite, award from the Army—full funding to pursue his advanced degree, but a three-year time limit to complete it.

“Carl’s work ethic and quality of output in such a short time are impressive, and we are proud to claim him as one of our graduates,” said William Evans, the Keough-Hesburgh Professor of Economics and chair of the department.

“His ability to complete both a master’s and Ph.D. in 33 months is even more astounding when we note that he has also completed three high-quality academic papers that we believe will eventually be published in selective, peer-reviewed economic journals.”

Officers are frequently selected by the Army to obtain advanced degrees across a variety of fields. Upon completion, they go on to fill a number of military roles—some are assigned as faculty at West Point, some serve as researchers and policy analysts for senior leaders, and some work as subject matter experts in technical areas.

Only a handful of officers per year are selected to receive full funding—but all must complete their Ph.D. in three years or less, no matter the subject.

“Not all officers are able to complete their dissertations in that time, which is why selecting a supportive school is important,” he said. “The combination of quality faculty and a small program where we receive individual attention and encouragement led me to choose Notre Dame.”

Wojtaszek, a married father of four young children, is the first Army-sponsored economics graduate student to attempt a Ph.D. program at Notre Dame. Despite the accelerated pace, Wojtaszek said his graduate education “did not look all that different” from an average student’s.

“The largest difference in my graduate experience was that my timeline required me to make the most of my second year and summers by constantly working data and writing chapters for my dissertation,” he said. “I used any waking moment I had when I wasn’t in class to work on research topics and ideas.”

Wojtaszek said he could not have done it without the support of the faculty in the Department of Economics—especially Evans, Associate Professor Abigail Wozniak, and Assistant Professor Ethan Lieber.

“This speaks more to the quality of the department than to my own ability,” Wojtaszek said. “It was the confluence of my three advisers—Bill’s ability to just make things happen, Abby’s encouragement and guidance to keep me on track, and Ethan’s accessibility—that made it possible to do this in three years.”

The support that Carl received from his faculty mentors is a hallmark of Notre Dame’s graduate programs, said Laura Carlson, dean of the Graduate School.

“Such a commitment,” she said, “reflects a holistic approach to graduate training that partners a student’s skills, talents, and goals with the highest-level of research expertise.”

Another advantage at Notre Dame, Wojtaszek said, is that the requirements of his advanced courses were focused on helping students advance their dissertations.

“The faculty’s intent is to help you produce a high-quality research paper in your second year that can later be used as a dissertation chapter,” he said, “and that allows you to take classes that not only deepen your knowledge in a field but also keep you focused on producing a dissertation.”

Wojtaszek’s dissertation focuses on three topics in the field of labor economics that are important to the Army and broadly relevant to economic theory. Using military data, he examined how soldiers’ bonus pay affects their charitable giving, how war casualties affect enlistment rates in soldiers’ home communities, and how the timing of a soldier’s exit from the army affects their use of the GI Bill to pursue an education.

“In my research, I found that discharging soldiers in February, six months before they would begin college in the fall, decreases college attendance by about 8 percent—which is not a small amount—compared with soldiers who leave in July,” Wojtaszek said.

“This is an important finding for the nation because of the concern we have for veterans, but it may also be broadly applicable when we consider the timing of layoffs and how that might affect workers going back to school to learn a new skill.”

A decorated Army officer who was awarded the Bronze Star, Wojtaszek received his undergraduate degree in 1999 from West Point before beginning a career that has included time in the 101st Airborne Division and the Army Military Intelligence Corps. As a captain, he was tasked with re-establishing legal and legitimate interrogation operations at the Abu Ghraib prison.

During his final year at Notre Dame, Wojtaszek was named an academy professor—the equivalent of a tenured position—at West Point. He will also serve as the deputy director of the Office of Economic and Manpower Analysis, conducting research for senior leaders in the Pentagon.

His success at Notre Dame has prompted the Army to direct a number of other applicants to the University. Wojtaszek sees this is the beginning of a promising relationship.

“I think Notre Dame will now be one of our go-to places—not only to send our officers to pursue advanced degrees but also a resource when we have a tough question. We will be able to reach out and work with some of the colleagues I have here.

“The bridge between Notre Dame and West Point is much stronger now because of my experience here. I hope to draw on that and develop that relationship even further.”

Originally published by Carrie Gates at al.nd.edu on August 19, 2015.