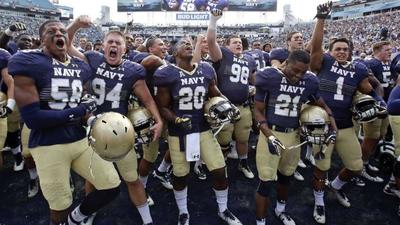 For the 91 uninterrupted years of a football rivalry between Notre Dame and Navy.

For the embarrassing riches of 75 victories earned by the Fighting Irish in the matchup.

For the lore and the heroes and legacies that were realized.

For the 92nd edition of the meeting that will be played for the first time in California on Saturday night at SDCCU Stadium.

For all of it, you can thank Army.

If someone at that branch of military service had responded in the early 1940s to an invitation by Notre Dame President Rev. Hugh O’Donnell to use the university as a training ground, it might be Army that the Irish have played for nine consecutive decades, rather than the sporadic nature of the 51 clashes with the Black Knights.

Army rejected Notre Dame with cold silence, so O’Donnell turned to the next men up, Navy.

Admiral Chester Nimitz was gung ho about sending his charges to South Bend, Ind., and not only did they respond by eventually running 12,000 officers through training between 1942 and 1946, they pulled Notre Dame out of dire financial straits that threatened to ruin the school.

By the fall of 1941, most of Notre Dame’s upperclassmen had gone off to serve in World War II. Many of those who remained were either deemed physically unfit to serve, or they were 17-year-old freshmen who were too young to be drafted.

“We were out of business during World War II,” former Notre Dame President Rev. Theodore Hesburgh said in a 1992 interview with the South Bend Tribune. “Navy came in and kept us afloat until the war was over.”

That does much to explain why Notre Dame has continued to annually schedule Navy, even if the frequent victories for the Irish do little to enhance the football team’s stature.

There’s no better example than this season. Notre Dame, an independent with no conference ties, is off to a 7-0 start, and with a No. 3 ranking is making a legitimate run at its first appearance in the College Football Playoff.

Against 2-5 Navy, which stands tied for fourth in its division of the American Athletic Conference, the Irish can win and still lose ground in poll voters’ opinions if they don’t properly whip a 23½-point underdog.

Relatively fresh wounds have to make Notre Dame fans nervous, and they’re playing for the first time in San Diego, a city with deep Navy ties, no less.

The Irish went on an extraordinary 43-game winning streak against Navy that spanned eight U.S. presidents, from 1964-2006. The last quarterback before the skein to lead the Midshipmen to victory was Roger Staubach in ’63.

Still, Notre Dame’s allegiance to Navy runs far too deep to let such trivial matters as a national title shot take over.

Their games with Navy always have been considered a debt of honor.

According to a story published in a 2001 edition of Notre Dame Magazine, the university’s ties to the military date back to the Civil War and 1858, when the student-organized Continental Cadets marched across campus in American Revolutionary-style uniforms.

It was a Notre Dame chaplain and future school president, William Corby, who gave the absolution to the soldiers at the Battle of Gettysburg. It also was Corby who revived a military training program in 1880, and by 1917 during World War I, all students were required to take a military class.

More than 2,200 Notre Dame students fought in World War I, which would turn out to be a rather small number compared to their contributions in the second World War.

When Navy agreed in 1942 to use the Notre Dame campus, it didn’t just take over a few classrooms. It paid the school $487,711 for infrastructure needs and administrative expenses while occupying a majority of the space on campus.

Thomas Schlereth, a historian and professor, recounted in his book, “The University of Notre Dame: A Portrait of Its History and Campus,” that “the war years inextricably changed Notre Dame.”

Leisurely, family-style dining in the South Dining Hall was replaced by speedy cafeteria service to feed more men quicker — “with much less than half the former intimacy and civility.”

Schlereth wrote that school vacation periods were shorter, classes accelerated, and in one year there was no Christmas holiday. With little presence before at the all-male university, women were omnipresent, filling various part-time jobs.

Something that never waned: football.

Indeed, the Irish easily have the military to thank for the national championship they won during World War II.

Notre Dame seized back-to-back national titles under Knute Rockne in 1929-30, but it hadn’t been on top again when Frank Leahy began coaching in 1941.

Leahy was 15-2-3 in his first two seasons with the Irish, but couldn’t do better than No. 3 in the Associated Press polls. Then came 1943, when a team comprised almost entirely of players from the military branches stormed to a 9-1 record and edged Michigan for the top spot.

On that Irish team were 14 Navy apprentice seamen, including quarterback Johnny Lujack, who would win the Heisman Trophy in 1947; 12 transfers from the Marines; and 17 Marine privates, including four future College Football Hall of Famers.

Civilians on the squad: four.

The quarterback at the start of the season was Angelo Bertelli, who would capture the Heisman that year. But he had to leave six games into the season to begin Marine officer’s training. Bertelli was in boot camp when he was handed a telegram informing him he’d earned the Heisman.

Bertelli fought in Iwo Jima and was awarded the Bronze Star and Purple Heart.

Tragically, seven former Irish players would die in the war.

No one was immune from heading off to fight. After the title of ’43, Leahy and his assistant coach, Ed “Moose” Krause, joined the Navy and served in 1944-45.

With a rank of lieutenant, Leahy never stopped recruiting. It has been reported that one day he sent underlings to find Ensign George Connor, a young man who’d played offensive line for two seasons at Holy Cross before going into the Navy.

Both lived up to the moment. Connor was an All-American in 1946 and ’47, and Notre Dame won a national championship in each of those seasons.

One more gift from the Navy to Notre Dame.

This article was originally published on The San Diego Union-Tribune.