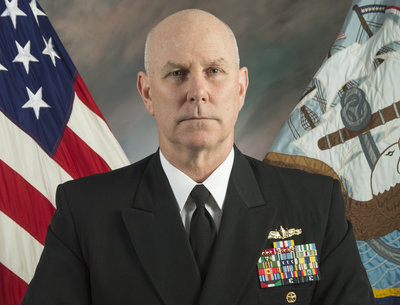 The Navy has nominated the head of its Europe-based U.S. Sixth Fleet as its next four-star fleet boss.

Vice Adm. Chris Grady, a career surface warfare officer from the cruiser/destroyer world, will replace Adm. Phil Davidson, who is widely expected to be the President Trump's nominee to lead U.S. Pacific Command.

At Fleet Forces, Grady will be overall responsible for manning, training, and equipping the Navy's forces, including working with U.S. Pacific Command to resource its needs. The role will likely evolve in the coming months to encompass perhaps even greater levels of responsibility over forces in the Pacific.

Grady is a Notre Dame graduate and was commander of the Carl Vinson Carrier Strike Group during its epic 10-month 2014-2015 deployment to Operation Inherent Resolve. His previous commands included Destroyer Squadron 22 and the destroyer Cole.

Grady has served as the Pacific Fleet's director of the Maritime Operations Center and then as the head of Naval Surface Force Atlantic.