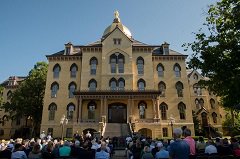 1968 and Vietnam…a time and a place that many Americans have chosen to forget.  However, it was this collective act of forgetting that spurred three 1968 Notre Dame alumni, composed of a renowned Notre Dame/NFL running back, a former Indiana governor, and a retired bank executive, to propose and then organize a Vietnam Commemoration Ceremony during Reunion 2018.

Pulling the Team Together 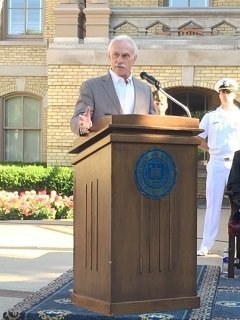 Rocky Bleier '68, a member of the federally established Vietnam War Commemoration Advisory Committee (VWCAC), had the initial idea to hold the commemoration event because of his own post-Notre Dame military service in Vietnam and his work with the VWCAC.  He also knew that he needed “boots on the ground” if the event was ever going to happen so he recruited two local classmates and fellow Vietnam veterans, Joe Kernan and Gene Cavanaugh, to coordinate the myriad of logistical details that needed to be finalized.

Cavanaugh made contact with Erin Thornton and Kristen White of the Notre Dame Alumni Association and secured support and a spot on the Reunion 2018 schedule of events.  They in turn referred him to Regan Jones, Notre Dame’s Director of the Office of Military and Veterans Affairs, and Captain Cody Brockelmeyer, Assistant Professor of Naval Science for the Naval ROTC Department at Notre Dame, to ensure that all military branches of Notre Dame’s ROTC programs were fully engaged in the event.

As Mr. Jones reflected back on the early days of the effort he stated, “There was never any doubt about this event taking place because once you get a committed group of Notre Dame alums together, there is just no stopping them in pursuit of a noble cause.”

Help From a Friend

However, one small problem remained…there was no good “go to” source of information concerning Notre Dame alumni who served during the Vietnam Era, let alone perished.  Fortunately, the core planning group linked up with an individual who grew up in the shadow of the Golden Dome, but never attended Notre Dame.  He had enlisted in the Army and served in Vietnam from March 1968 through May 1969.  This individual was Darrell Katovsich and to say that he is a Friend of Notre Dame would be an understatement.

“Ever since returning from Vietnam, because of the peace I found whenever visiting Notre Dame, I had a yearning to give back,” said Katovsich.  “Then in October 2017, I learned that Notre Dame did not have a list of those alumni who had died in Vietnam.  This was my chance for closure in so many ways.”

With concentrated effort, Katovsich produced a comprehensive list of names that was finished only days before the ceremony was to take place. 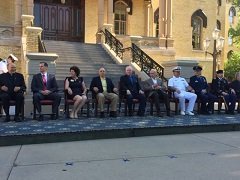 With a crowd of nearly 400 gathered in front of the Administration Building, the 2018 Alumni Reunion Vietnam Era Commemoration Event was opened with a welcome by Captain Brockelmeyer who served as the event’s narrator.  Rev. Peter Rocca, C.S.C., Rector of the Basilica of the Sacred Heart, then offered an invocation.

Next came a very special presentation of the colors by a flag detail comprised of six Navy Ensigns and one Air Force Second Lieutenant who recently graduated from the Notre Dame ROTC program.  As the American flag stood tall, the detail dipped the service branch colors while the National Anthem played.

Rocky Bleier, the featured speaker for the event, then rose and addressed those assembled by saying, “Our experiences changed us.  We either copped out or we coped, and for those who survived, we worked hard…and made it.  Now that we have come of age, we’re the ones who feed this nation and care for the sick.  We’re the ones who own the factories and make the country’s decisions.  We paid a price.  So be proud not only as Americans, but as veterans.  Because you deserve it.  You did good.”

When Bleier finished his remarks, all those veterans present and who served in the military between the years of 1955 and 1975 were asked to stand and come forward.  Each Vietnam Era veteran proceeded to the dais where the platform party presented them with the official Vietnam War Commemoration Pin, a Presidential Proclamation commemorating the 50th Anniversary of the Vietnam War, and a letter from Notre Dame President, Rev. John I. Jenkins, C.S.C.

In his letter, Fr. Jenkins wrote, “You served during a time of turmoil in our nation, and perhaps did not receive the thanks you deserved.  I want you to know how deeply proud and grateful we are for your generous and courageous service to our country.  Thank you for you sacrifice and selflessness.”

With the words above the East Door of the Basilica, “God, Country, Notre Dame” almost serving as a final call, those gathered rose to their feet.  Then with a similarity to the Litany of Saints, the names of the fallen from the Vietnam Era were read aloud in honor, respect and reverence:

After the last name was etched into the hearts of the attendees, “Taps” wafted over the crowd from a solitary bugle…followed by a benediction given by ’68 alum, Rev. John Sheehan, S.J., who prayed, “Today we have come together to celebrate faith and patriotism, courage and comrades, and to honor the pledge that the sacrifices of those who served will never be forgotten.”

Finally, with Our Lady looking down on the assembled crowd from atop the Golden Dome, the Alma Mater played.  And with the words “Love thee Notre Dame” in the background, it was not hard to imagine the sound of Her voice saying to these fallen sons of Notre Dame now gathered in Her heavenly presence, “I am so glad that you are all here.  While He has called each of you by name, let me introduce you to My Son.  I have been telling Him all about you good and faithful servants for quite some time.”

This article was originally published on the Notre Dame Senior Alumni Page.