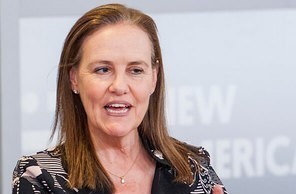 In the upper echelons of U.S. government security and defense, women still struggle to find seats at the table. Researchers have noted that in the State Department women have never exceeded 40 percent of senior positions, and in the Department of Defense only 20 percent.

With the goal of building a dynamic community of women prepared to serve in the international security arena, the Notre Dame International Security Center convened the new series Women Inspired to Serve (WISE). Partnering with the advocacy associations Women in Defense, Women in International Security and Girl Security, WISE hosted its inaugural event, “Share Your Map,” on March 25 featuring a virtual fireside chat with Michèle Flournoy and Ellen Lord, both of whom served in high-level U.S. government defense positions.

Flournoy and Lord, guided by Notre Dame student leaders Erin Connolly and Lindsey Dorenkott, dispensed practical career advice and gave attendees an overview of their professional “maps” that steered them both to distinguished positions.

Flournoy, who served as the under secretary of defense for policy from 2009 to 2012, advised attendees to pursue something they are passionate about, “not just a matter of the head, but the heart.” During her very first research project, she “terrified herself” reading about how many times the U.S. came close to nuclear war. These stories, Flournoy said, got her really committed to working in the field of nuclear arms control. Although Flournoy started out in the field during the end of the Cold War, she noted how different the issues are today.

“We’re living through a pandemic and witnessing the effects of climate change,” she said. “National security is not just about nation-states fighting one another; there is a human security component to this. We need to look at it in a broader way.”

Lord, initially a chemist, came to work for the Department of Defense as under secretary of defense for acquisition and sustainment via what she called a “long and circuitous path.” She didn’t have a similar emotional moment like Flournoy, but she found working for the DOD a way to be part of something very significant and very challenging. Her vast business experience made it clear to her that industry wasn’t engaging as much as it could have with the DOD.

“Many people find that extremely intimidating,” she said. “When you get into business problems and you’re trying to take a technology from a concept to an actual application, it doesn’t work like the military; there are people at all levels in industry who are experts. Some subordinates in the DOD wouldn’t dare speak up.”

Knowing this, when Lord held meetings at the Pentagon with military acquisition people, she was blunt and aimed to be an efficient problem-solver. She would ask the people in the field what was preventing them from completing tasks and what they needed to get the job done. “I felt like I could connect the dots. It was very rewarding to have someone thank me for making something happen.”

Connolly, a master’s student and associate program director for Girl Security, asked the experts which emerging technologies they think are particularly important. Lord named artificial intelligence, 5G technology, digital technology, supply chain illumination technology and microelectronics. Flournoy stressed that U.S. networks are constantly under attack and noted that one of the U.S.’s strengths as a nation is its dedication to ethics and the rule of law. In 2020, the DOD adopted a series of ethical principles for the use of artificial intelligence, which Flournoy says should be a significant differentiator for the U.S.

She would like to see artificial intelligence technologies brought together to create a resilient “network of networks” that accommodates better-quality defense and security decisions.

“When we go overseas, we’re almost always in someone’s backyard,” Flournoy said. “With a competitor, they’ll have advantages because they’re close to home. We need to pair unmanned and manned systems — this complicates competitors’ plans.”

Even if one pursues a career in public service, Dorenkott, who is a senior at Notre Dame and president of Notre Dame’s chapter of Women in International Security, wanted to know if it is also helpful to have an intellectual or academic “home.” For Flournoy, that has been at think tanks and consultancy companies, several of which she co-founded. She encouraged the attendees to pick the best bosses — ones who could serve as mentors and be supportive. Flournoy’s own mentor helped her get over her fear of public speaking.

Lord also values advocacy agencies like Women in International Security and Girl Security but advised the participants to “get comfortable being uncomfortable,” meaning they should seek opportunities in cities and organizations where they don’t know anyone. Lord stressed that it is often men who take those leaps, but she wants women to take more chances and seek out new connections and job prospects.

The most rewarding aspect of her career, Flournoy said, has been investing in the next generation of security professionals, and she stressed the difference it makes when teams are diverse and inclusive.

“I think we take for granted what good it does for the country, not just the individual. There’s a performance and talent argument: The more diverse the team, the better decisions and the higher-performing it will be. When you cut out women, you’re cutting out more than half the population. Being more explicit about this, it’s not just moral but essential!”

Following the fireside chat, WISE participants were invited to take part in virtual breakout networking sessions with senior experts from a diverse range of defense and security fields. These small group sessions enabled students and early career professionals to directly engage with current leaders and learn about their respective career paths. The first in-person WISE networking and professional development conference is scheduled for Feb. 11-12, 2022, at Notre Dame.

This article originally appeared on news.nd.edu on April 12, 2021