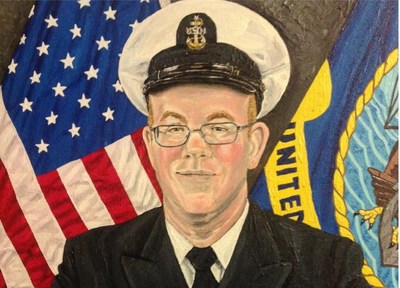 Jacob Mazurek, a second year Mendoza MBA student, stands out among his peers not only as a Navy veteran of 23 years, but also as a devoted and accomplished painter.

Students may recognize him from around campus, where he can often be found painting in public spaces. His favorite spots, he said, include Modern Market in the Duncan Student Center, Starbucks in the LaFortune Student Center and the Hammes Bookstore.

Mazurek completed his latest piece, a painting of the Basilica of the Sacred Heart, two weeks ago. He said he spent over 950 hours painting it.

“I was on the campus tour during orientation, and the moment I took the photo of Basilica, I thought it would be a good painting,” he said. “I went back over and over again to take more photos for details and get things right in their positions.”

Mazurek said he spent 950 hours over the course of a year to complete his painting of the vaulted ceiling of Notre Dame’s Basilica of the Sacred Heart.

Mazurek said he started painting because of a girl from South Africa when he was in high school. There were several posters of color exercises hanging on his apartment and the girl asked if he could make her one.

“I liked her, so I immediately bought a bunch of materials and asked people what type of painting should I start with, but eventually I painted something that wasn’t what she asked for at all,” he said. “I didn’t get her, but my painting life started.”

Mazurek graduated from high school with a 2.0 GPA and was not able to afford university, he said. He decided instead to join the Navy where he served for 23 years, travelling to 29 countries over the course of his military career.

“I brought my hobby with me on the ship,” Mazurek said.

Depicted is a self-portrait by Jacob Mazurek. Mazurek began painting in high school and cultivated his passion throughout his Naval career.

After settling down in a base, he said he would check out local art museums, learn the culture and start to paint. Mazurek said he was stationed in Bahrain for an extended period, and cites the local art and culture as a major artistic influence.

“There was the Bahrain Contemporary Art Association just across the street from my base,” he said. “I requested to hang out there, and I met some artists. In a separate room, we drank coffee, painted and talked about expressionism and local aesthetics.”

One of Mazurek’s paintings, titled “The Bahrain Contemporary Art Association,” depicts the local art scene in Bahrain, showing the room with his artist friends’ paintings on the walls and floor.

He also spent five years in Japan during his service, where he also engaged with the local art scene. An art museum was situated near the Starbucks where he used to paint, he said, and one day the museum staff struck up conversation with him.

“I know five sentences in Japanese and they know five sentences in English, so we made the whole conversation happen,” he said. “We didn’t need to speak difficult words. I showed them the paintings. They pointed at some places and asked questions. We also shared about our backgrounds and life experiences. When they asked me where I am from, I brought up a map and pointed at the United States. Then I asked where they were from, and they turned the map around to show Japan,” he said. “The words were less important than the tone and attitude.”

He even participated in an art contest there and received a prize, he said.

“I was excited but when I looked around, there were 50 other people who got the prize too,” he said, laughing.

Mazurek said painting helped him deal with the challenges of serving in the Navy.

“My job could be stressful sometimes, so painting made me take a step back and just be myself, getting my mellow and enjoying the world in front of me,” he said.

“I developed a lot of patience in the Navy,” he said. “I was a sonar operator in the beginning, and I spent hours and hours staring at the moving static. Sometimes we tried to check every area in the ocean. I gradually accepted that I might not accomplish so much work in one day. So when it came to painting, I started to admit that I had to draw without seeing it completed soon, and I need to be patient and positive with it.”

Taking photos and turning them into paintings is Mazurek’s specialty. He said there is a file of photos piling up in his home that he may paint some day.

Mazurek said his military training has informed his painting technique. When recreating paintings from photos, he uses a coordinate grid system to magnify the photo with correct proportions, painting objects to scale with precise detail.

During his service, he said he also found time to study and completed his associate bachelor and master’s degrees, mainly through online courses.

“On my first serving ship, I was taking an astronomy class,” he said. “One night, after my reading, I went to the deck and looked at the sky. When there was no light blocking me from seeing the starry night, I saw various constellations and the Milky Way. … I haven’t been in any action or hot war, and my paintings are also about the beauty of nature and humanity.”

This article first appeared in The Observer on November 12, 2019. To view the original article, click here.