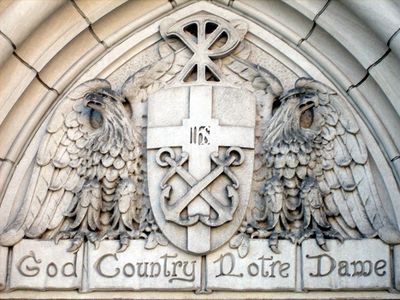 Notre Dame launches a new tradition this year on the weekend of the Navy game.

At the suggestion of two members of debate team of the United States Naval Academy, the University of Notre Dame will inaugurate the first Notre Dame-Navy debate on Friday, November 15.

Midshipmen Will Lewis and Nicholas Gutierrez will represent the Naval Academy and Conrad Palor and Patrick Aimone, the recent winners of the ACC Debate Championship, will represent Notre Dame.

The topic of the debate will be:  Resolved:  The United States ought to provide a Universal Basic Income.

The event is sponsored by the Department of Film, Television, and Theatre and is free and open to the public.

This article first appeared on https://ftt.nd.edu/events.