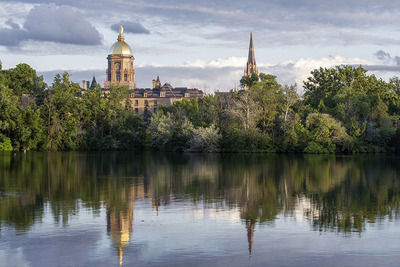 Members of the Notre Dame community will run and walk around St. Joseph’s Lake and St. Mary’s Lake for 22 straight hours next week in support of Mission 22, an organization that helps veterans who have experienced mental or physical trauma.

The event, “Lap the Lakes: A Run to Support Mission 22 at Notre Dame,” is hosted by Notre Dame Law School’s Military and Veteran Law Society. The first lap will start at 6 p.m. on Thursday, September 16, and the final lap will finish at 4 p.m. on Friday, September 17.

Eric Leis, a third-year law student and president of the Military and Veteran Law Society, said the date for “Lap the Lakes” was chosen because this month marks the 20th anniversary of the 9/11 attacks and September is also National Suicide Prevention Month.

“About 7,000 service members were killed in the wars in Afghanistan and Iraq. That number, however, is much higher when you consider that over 6,000 veterans, many of whom served in support of the wars in the Middle East, die by suicide every year,” said Leis, who earned his bachelor's degree in mechanical engineering from the University of Notre Dame in 2011 and later served for eight years in the Navy.

“Many of us in the Notre Dame Veteran community have experienced the loss of a friend and fellow Soldier, Airman, Marine, and Sailor,” Leis said. “We want to honor these men and women, and the lives of so many others, by raising awareness of the mental and physical battle that veterans continue to fight on the homefront.”

Click here to support the “Lap the Lakes” fundraiser for Mission 22.