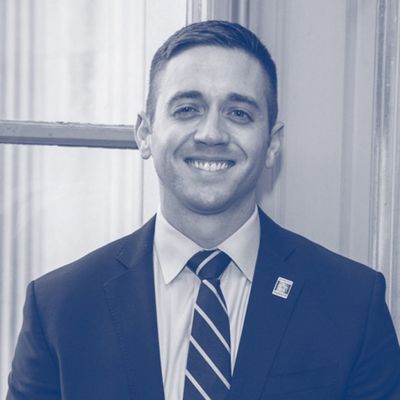 Notre Dame Army ROTC alumnus Jay Rowley '11, Captain, U.S. Army, was selected by the Young ND Board, the Notre Dame Alumni Association's newest affinity group, and a selection board made up of University officials to be among the inaugural Domer Dozen.  The Domer Dozen is a group of 12 Notre Dame alumni ages 32 and younger who have shown extraordinary dedication to making a difference and have made significant contributions in one of the four core tenets of the Alumni Association's mission statement - faith, service, learning, or work.

A double major in Arabic and History and a graduate of the ROTC program, Captain Rowley currently serves in the U.S. Army.  Immediately after graduation, he volunteered as an after-school care manager for AIDS orphans in Canzibe, South Africa, immersing himself in Afrikaans and Xhosa, the languages of the local region.  The experience reinforced that the true window into another culture is through the language of its people, a principle Rowley employs time and again in his career.

Having completed Ranger School, Rowley has served as a platoon leader and detachment commander and has twice deployed to the Middle East as part of Operation Inherent Resolve.  There, he used his knowledge of Arabic and Islamic culture to provide daily insights that assisted Coalition efforts to defeat ISIS in Iraq and Syria.  The Coalition recognized his impact by awarding him with the Distinguished Meritorious Service Medal.

Rowley has been selected as one of five Army officers for the Olmsted Scholar Class of 2020, a rare opportunity as part of a leadership development program for exceptional young officers.  The program provides him with a year of language training in Hebrew at the Defense Language Institute in Monterey, Calif., where he and his wife, Maddie, currently reside.  Next year they will relocate to Jerusalem where he will begin a two-year master’s degree taught in Hebrew.  During their time in the Middle East, Rowley intends to use the opportunity to better understand the challenges of peace and security throughout the region.

To learn more about the inaugural Domer Dozen and the honorees, please click here to view the University press release.