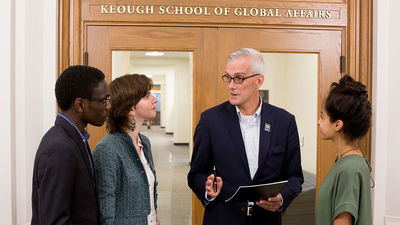 Denis McDonough, professor of the practice of public policy in the Keough School of Global Affairs at the University of Notre Dame, was nominated today by President-elect Joe Biden to serve as secretary of the Department of Veterans Affairs. The Cabinet appointment is subject to Senate confirmation.

“Denis is a dedicated public servant who, over the past three years, has been a valued member of our Keough School faculty, sharing his considerable expertise in public policy, international and domestic affairs and management with both graduate and undergraduate students,” Rev. John I. Jenkins, C.S.C., Notre Dame’s president, said. “I join his campus colleagues in extending congratulations on his nomination and wish him well in the confirmation process.”

R. Scott Appleby, the Marilyn Keough Dean of the Keough School of Global Affairs, added: “Professor McDonough is an invaluable member of our policy studies faculty at the Keough School. Generous with his many talents, he is a natural teacher and mentor of our global affairs graduate and undergraduate students. He is an outstanding role model of an American patriot who cares deeply about advancing human dignity globally and here at home. If confirmed, he will serve the Biden administration and the nation’s veterans with the same tireless dedication and skill he demonstrated in his years working closely with President Obama.”

McDonough joined the Notre Dame faculty in August 2017. He teaches courses on public policy analysis and formulation; writing for policy, government and nongovernmental organization management and leadership; and selected topics such as migration and refugees and national and international security. He also contributes policy expertise to the Keough School’s Global Policy Initiative. He will remain on the Notre Dame faculty on academic leave.

Most recently, McDonough is directing a Notre Dame research program called the Presidential Transition Index, which seeks to identify potentially weak areas of the current presidential transition process and to provide the public with an ongoing, near real-time assessment of the transition.

Chief of staff to President Barack Obama from February 2013 to January 2017, McDonough and Andy Card, chief of staff to President George W. Bush, were the featured speakers for the 2017 Notre Dame Forum, “Going Global: Exploring the Challenges and Opportunities of Globalization.” Addressing an audience of more than 1,000, they offered observations and commentary on foreign policy from their perspectives as chief confidants to Bush and Obama.

As Obama’s chief of staff, McDonough managed the 4,000-member White House staff, as well as Cabinet secretaries and agency leaders. He provided strategic advice to the president on the most significant domestic policy, national security and management issues facing the federal government and enforced plans and accountability for performance and goals.

McDonough also planned and coordinated efforts to recruit and retain key talent — including an unprecedented expansion of technology experts, engineers and content generators within the White House and across the federal government.

Prior to his role as chief of staff, McDonough served from September 2010 to February 2013 as assistant to the president and principal deputy national security adviser. He chaired the National Security Council’s Deputies Committee, leading a multiagency team that addressed complex national security challenges, including crisis management as well as policy decisions related to the Iran nuclear negotiations, strategic arms reductions talks with Russia, the United States re-balance to Asia, the Afghanistan surge and the Iraq drawdown. He was among the small group joining Obama in the White House Situation Room on May 1, 2011, when Navy SEALs raided Osama bin Laden’s compound in Pakistan.

McDonough also currently serves as senior principal at the Markle Foundation, where he has worked to address the labor market skills gap, particularly in light of the looming artificial intelligence revolution.

The Keough School of Global Affairs — founded in 2014 as Notre Dame’s first new degree-granting school or college in nearly a century — prepares new generations of students for skilled, effective and ethical global professional leadership. The school’s Global Policy Initiative was established to create new opportunities for engagement with policymaking institutions and programs in Washington, D.C., and around the world.

This article was originally published at news.nd.edu.