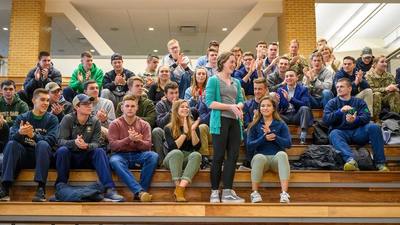 University of Notre Dame senior Nicole Butler has been selected as the nation’s Army ROTC student of the year and to the ROTC All-American Team, an awards program now in its second year that honors the best and brightest ROTC seniors across the country.

“I was thrilled to learn of Nicole’s selection,” said Rev. John I. Jenkins, C.S.C., Notre Dame’s president. “The attributes recognized by the award — her leadership, military excellence, scholarship and service — will serve her well as she completes her Notre Dame education and begins her military career. Notre Dame has a long, proud history with ROTC, and outstanding students like Nicole are part of the reason why. I join with her family, friends, fellow cadets and the ROTC faculty and staff in offering my sincere congratulations.”

Butler knew she was a finalist but did not know she was selected as the top Army ROTC student until Thursday afternoon (Dec. 12), when it was revealed during the ESPN2 program “College Football Live.”

“This whole experience has been amazing,” Butler said after the announcement. “It’s been humbling to have the support of everyone in our battalion.”

Butler is from Spring, Texas, and will graduate in May with dual degrees in Arabic and biochemistry. She was selected from a group of 12 finalists who:

Air Force and Navy students of the year also were recognized. Butler and the two other top students will receive $6,500 scholarships, and their units will receive a $5,000 donation. The winners also will be honored Dec. 27 at the Military Bowl at the U.S. Naval Academy in Annapolis, Maryland.

In a slightly different format last year, Notre Dame’s Kirsten Cullinan was recognized as the Air Force ROTC student of the year.

The program is sponsored by Navy Federal Credit Union.

This article originally appeared at news.nd.edu on December 12, 2019.