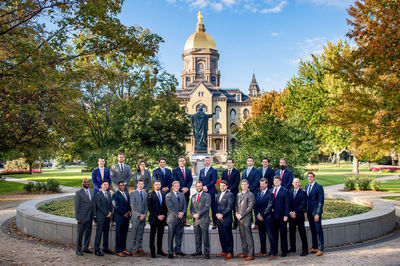 Senior Timothy Hopkins always knew he wanted to join the military. This wasn’t his only childhood dream, however — he had also wanted to attend Notre Dame. Yet, coming out of high school, he said this goal was out of reach.

“For me personally, in high school, I was going to summer school,” he said. “Notre Dame was always a dream of mine but it was never something I could have materialized. Academics weren’t a priority.”

Instead, Hopkins said he planned to enlist in the military and used this as an excuse to ignore his studies. From 2010 to 2014, he served in the Army and was assigned to the 75th Ranger Regiment. During this time, he deployed to Afghanistan a total of four times.

“Our primary mission was we targeted high-value targets, so everything was a kill or capture and it was a night raid, so we would actually sleep all day and then we’d wake up as the sun was going down,” he said. “We would get our information if we were going out that night on a mission and our missions would generally last maybe three to five hours, and we were getting back to base as the sun was coming up.”

Going into the military, Hopkins said he gained a new perspective on life.

“I was a child mentally, physically — I was just a kid and I left [the Army] just with life experience,” he said. “And it wasn’t necessarily like on day one when I got on the bus I was a different person. It was a gradual thing that happened where I just kind of matured. I took ownership of myself and my actions.”

After serving in the Army for four years, Hopkins attended Colorado State University for two semesters and the University of South Carolina for another. Then, in 2016, he fulfilled a childhood dream — he transferred to Notre Dame.

“I was thrilled,” he said. “It definitely didn’t hit me for awhile. … There were so many people that helped me along the way [and] it was such a group effort.”

For student veterans such as Hopkins, one of the University’s biggest draws is its resources for veterans.

“Even if you are struggling with something, then people at this school are going above-and-beyond and out of their way to make sure you succeed,” Hopkins said. “I think a lot of veterans, at the same time, are very prideful and they’re stubborn to a point where they don’t want to ask for help and I’m kind of like that, but at times you’re going to need help and you need to be smart enough to realize when it’s appropriate to ask for it.”

The University established the Office of Military and Veterans Affairs in November to increase support for military-connected students. In addition, according to an article from the Office of Public Affairs and Communications, the G.I. Bill grants veterans approximately $25,000 towards tuition and roughly the same amount for housing. Notre Dame also provides $16,000 to veterans through the Yellow Ribbon Program, an amount matched by the Veterans Administration.

“They make it a huge point to help show veterans what we can bring to the table here, just as much as what the University can provide us,” she said. “And I think finding the right business school … you have to find a mutual fit [by asking] what can you bring to the table, and in return, what can we get from this situation, from this school? I think because of the welcoming environment, the transition was really smooth for me.”

William Wilkins, a first year MBA student who served in the Army for 21 years, also said the MBA Veterans club helped draw him to Notre Dame. He serves as the organization’s vice president.

“I feel like [the club] was one of the reasons Notre Dame stood out, too, because [through] the program here I had gotten to know some of the guys in the program and really like the family atmosphere and the guys looked out for each other,” he said. “It was a factor in my decision to apply and not apply other places.”

Corey Waldrep, a first year MBA student who served in the Marines for four years, said he has seen an overall increase in resources for veterans, beyond Notre Dame, since he left the military in 2011. Many of his friends lacked support when transitioning out of the military, Waldrep said.

“They just felt isolated or something, so some of my friends ended up killing themselves because they didn’t have anything and then some of my other friends, they just don’t do anything or they don’t have that drive anymore,” he said. “And I don’t know if it’s specifically for when we all got out, but maybe that could’ve helped. But now, there’s so much stuff available to people separating.”

Beyond its support for veterans, Waldrep said he was drawn to Notre Dame because of the school’s ethics. After leaving the military, Waldrep did contract work for the government in an environment often lacking these values.

“I wanted to come to Notre Dame just based on the ethical aspect of it,” he said. “A lot of times [in] the capacity I was working for the government, I saw a lot of corruption or abuse of power, so that was my big thing — moving forward I wanted the ethical foundation making decisions at the high level.”

Similarly, Hopkins said he was attracted to Notre Dame because of its values, many of which he said reflected those of the military.

“[Notre Dame faculty] have such high standards,” he said. “They expect discipline out of you. There’s a commitment to excellence here. They expect you to do everything to the best of your ability. They push you. They make you uncomfortable just so you can grow in certain ways and these are all things you see in the military.”

These values are also reflected in the University’s commitment to service, Hopkins said.

“I think what’s kind of unique about Notre Dame is just the selfless qualities,” he said. “I volunteered to go into the military, people on this campus are volunteering and instead of going to summer vacation on the beach, they’re going on ISSLPs or something like that.

“And there’s so many opportunities here, it’s like being a man and woman for others, the selfless service and volunteering. And then there’s such an expectation here to hold yourself to a higher moral standard that I think a lot of institutions ignore.”