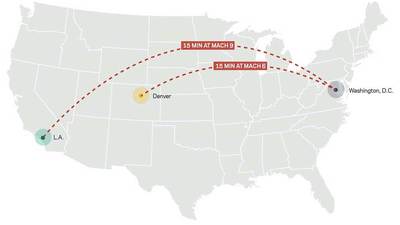 Map of the United States showing distance from Washington, D.C. to Denver and L.A.

The $5.4 million project is the first step in a partnership between Notre Dame and Purdue University to develop multiple hypersonic tunnels.

The tunnel is designed to minimize acoustic disturbances present in conventional high Mach number wind tunnels, which are known to affect laminar-to-turbulent transition. Developed in collaboration with a team of Boeing researchers, and weighing nearly 5 tons, it features an optimized combination of low noise and minimized cost.  With its 24-inch exit diameter, the resulting quiet zone test length is nearly 6 feet — compared to about 28 inches in Mach 6 quiet tunnels at other universities in the country.“This tunnel’s combination of low noise and large size enables previously impossible experiments to be carried out,” said Thomas Juliano, assistant professor in the Department of Aerospace and Mechanical Engineering at Notre Dame and principal investigator of the project. “It will have a key role in our ability to predict and control hypersonic boundary-layer transition, knowledge critical to the design of future high-performance hypersonic vehicles.” 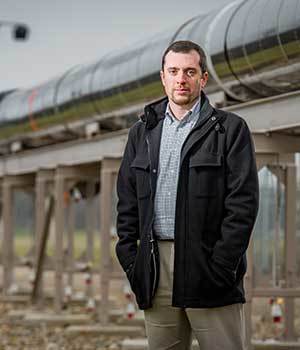 A commercial airplane capable of traveling at Mach 6 — six times the speed of sound — would get commuters from Washington, D.C., to Los Angeles in just 23 minutes. But hypersonic flight is also a key government interest — a way to get emergency and military aircraft to hotspots around the world quickly. To reach those speeds, researchers must improve the accuracy of heating predictions and design effective thermal protection systems, both of which are addressed by the capabilities of the new Notre Dame facility.

“The suite of large hypersonic quiet tunnels is designed to work in tandem to address the difficult technical issues facing the development of hypersonic aircraft,” said Thomas Corke, Clark Equipment Professor and director of Notre Dame’s Institute for Flow Physics and Control.Corke said plans are already underway for a quiet Mach 8 tunnel at Purdue and a Mach 10 tunnel at Notre Dame.

A ceremony to mark completion of the tunnel will be held at White Field Research Laboratory on the Notre Dame campus with researchers from Purdue, guests from government agencies, and local and state representatives.

In addition to the AFOSR, the project received support from the Office of Naval Research, The Boeing Company, Notre Dame’s College of Engineering and Notre Dame Research.

This article was originally published on Notre Dame News.