This past July 4th, South Bend and the University of Notre Dame celebrated “Independence Day” in an exciting new way: by embracing physical fitness and raising money for a patriotic cause.

The first annual “Storm the Stadium” fundraiser invited community members to stair-climb in the historic Notre Dame stadium—either the lower bowl (1,778 steps), or both the lower and upper bowls (3,418 steps)—for $40 or less. Other options included walking a loop around the upper deck (700 paces) or enjoying the family fun zone on the field. 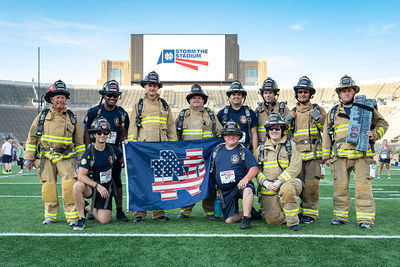 The goal? To raise money for scholarships, fellowships, and program support for military service members and veterans enrolled in studies at Notre Dame.

With a turn-out of almost 1,500 people, undeterred by the 80+ degree temperatures and cloudless skies, the event began with an opening ceremony that included remarks from Rev. John I. Jenkins, C.S.C. and Mayor Pete Buttigieg on the video board, a reading of the preamble of the U.S. Declaration of Independence, the national anthem, and local schoolchildren reciting the Pledge of Allegiance.

According to the event’s organizer, Regan Jones, the event was a success: “Our goal was to raise $30,000 and we exceeded it tremendously, bringing in a final total of $59,000.”

Jones, who is the director of Notre Dame Office of Military & Veterans Affairs, is a veteran himself. After watching the September 11 terrorist attacks on the news, Jones, then a senior at the University at Albany and starting center on the football team, joined the Marine Corps, serving two combat deployments in Iraq and receiving a Purple Heart and Navy and Marine Corps Commendation Medal with combat distinguishing device.

In his directorship at the Office of Military & Veterans Affairs, which is celebrating its first anniversary, he works to enhance the campus experience for military-connected students and their families, supporting veterans, active duty service members, and members of the Reserves, National Guard and ROTC. Having battled his own encounters with combat-related injuries and post-traumatic stress disorder, he also works with faculty and staff to raise awareness of the unique needs of service members and veterans and to promote inclusivity and a welcoming environment for these individuals on campus.

With more than 250 military-connected students enrolled at Notre Dame in a given semester, Laura Carlson, vice president, associate provost, and dean of the Graduate School, was thrilled by the event’s success.

“We are honored to educate scholars and researchers who have served our country,” Carlson said. “Their presence on our campus provides a shining example of leadership for the rest of the community, embodying Father Sorin’s call to be a force for good. To be able to celebrate them on our nation’s birthday and raise funds to support their studies through Storm the Stadium is such a joy.” 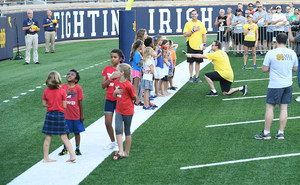 Dee Gipson, program director of recruitment strategies for the Graduate School, also attended the event. “I couldn’t think of a better way to celebrate the 4th of July than by honoring a motto I hold dear: God, country, Notre Dame,” she said.

“Since September 11, 2001, more than 3.8 million veterans have served in the U.S. military,” Jones said. “The Office of Military and Veterans Affairs will ensure that those military-connected individuals within the Notre Dame community experience the gratitude that we have for their sacrifice for our country and feel fully supported in their academic pursuits.”

Jones reports that preparations for next year’s Storm the Stadium, which will take place on April 27, 2019, are already under way.