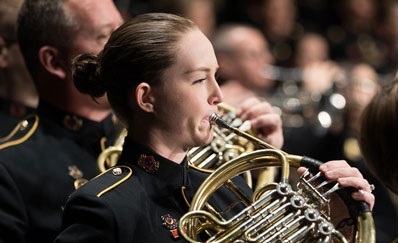 On Saturday, March 14 at 7:30pm, all are welcome to attend the U.S. Army Field Band Concert in the Leighton Concert Hall, DeBartolo Performing Arts Center.

From Boston to Baghdad, Tampa to Tokyo, the United States Army Field Band has been thrilling audiences of all ages for more than half a century. As the premier touring musical representatives for the Army, four ensembles travel thousands of miles each year performing a variety of music to enthusiastic audiences throughout the nation and abroad.

Continuing their spring season tour, the United States Army proudly present the Concert Band and Soldiers' Chorus of the U.S. Army Field Band. Come to hear and cheer these "Musical Ambassadors" in concert.

Family friendly, all ages are welcome.

This article originally appeared at the following location: https://performingarts.nd.edu/event/12557/us-army-field-band/#utm_source=The%20Week&utm_medium=ND%20Newsletter&utm_campaign=The%20Week&utm_term=Presenting%20Series&utm_content=USAF%20Band%20Concert