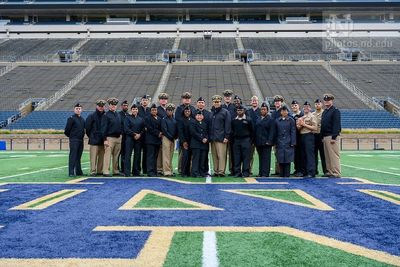 Members of the crew of USS Indianapolis, the U.S. Navy’s newest littoral combat ship, visited Notre Dame Stadium on October 22, 2019. The Sailors had the opportunity to explore the North Tunnel, and run a football play or two on the field.

USS Indianapolis (LCS 17) was commissioned in Burns Harbor, IN on October 26, 2019. The commissioning ceremony honored veterans of USS Indianapolis (CA 35), a cruiser which sunk in the final days of World War II after completing a secret mission to deliver components for an atomic bomb. Her crew spent several days in the water awaiting rescue.

More than 8,000 people attended the commissioning ceremony including Indiana residents and friends and family of the crew.

USS Indianapolis will be homeported in Naval Station Mayport, Florida.