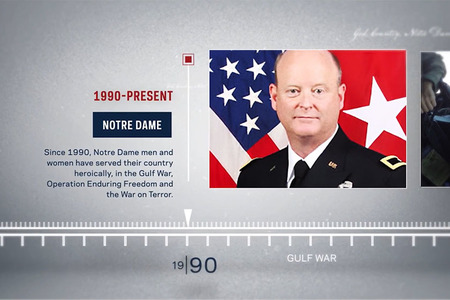 The University of Notre Dame and the U.S. Military

Notre Dame has been teaching students how to be soldiers since the administration organized the Continental Cadets in 1859. The trainees marched across campus in uniforms styled like those of the American Revolution.

These cadets had some unlikely role models.

Some 20 years before, Rev. Edward Sorin, C.S.C., had left France on an expeditionary mission to establish a Congregation of Holy Cross outpost in what at the time was a remote land, the United States. After arriving in New York and making his way to a parish in southern Indiana, Fr. Sorin and seven brothers of Holy Cross hiked 250 miles in the bitter cold of November 1842 to literally build what eventually grew into Notre Dame.

The sense of duty, determination, and commitment to mission that led to the founding of this University are values we share with and deeply admire in the United States military. It is fitting, then, that beginning with the Civil War, generation upon generation of Notre Dame students, alumni, and even Holy Cross religious have lived out these principles in service of our country.

But Notre Dame’s bond to the military runs even deeper than the values we hold in common or the sacrifices of those who have served on our behalf.

During World War II, more than two-thirds of the student body enlisted, placing the University in dire financial straits. In stepped the Navy.

A V-7 program that would train 12,000 officers was established here on campus, and it, in the words of Rev. Theodore (Ted) M. Hesburgh, C.S.C., “kept us afloat until the war was over.” For that reason, once Fr. Ted became Notre Dame’s president, he promised to play Navy in football every year as long as the Naval Academy wanted to do so.

Before that, though, Fr. Ted was a young priest who worked closely with the large number of veterans who used their GI Bill benefits to attend Notre Dame following the war. The University provided them with housing at Vetville—a complex built near where the Hesburgh Library now stands—as well as family services and educational assistance.

In the best spirit of Notre Dame, Fr. Ted ministered to the needs of the veterans and their families as their chaplain. His engagement and advocacy extended into and throughout his 35-year tenure as president, during the conflicts in Korea and Vietnam and beyond. This created a tradition of helping veterans seeking to better themselves through higher education, one that his successors as president—Rev. Edward A. Malloy, C.S.C., and since 2005, Rev. John I. Jenkins, C.S.C.—have been proud to support and expand.

Notre Dame also continues to be a training ground for the next generation of military leaders. After the academies, the University’s ROTC program is among the national leaders in graduating commissioned officers.

Overall, more than 15,000 Notre Dame alums have joined the ranks of our nation’s military during the past 75 years.

Looking back at this history and how it is still being written today, it is no wonder that what started as a phrase on a campus memorial has come to define this place as much as any other: